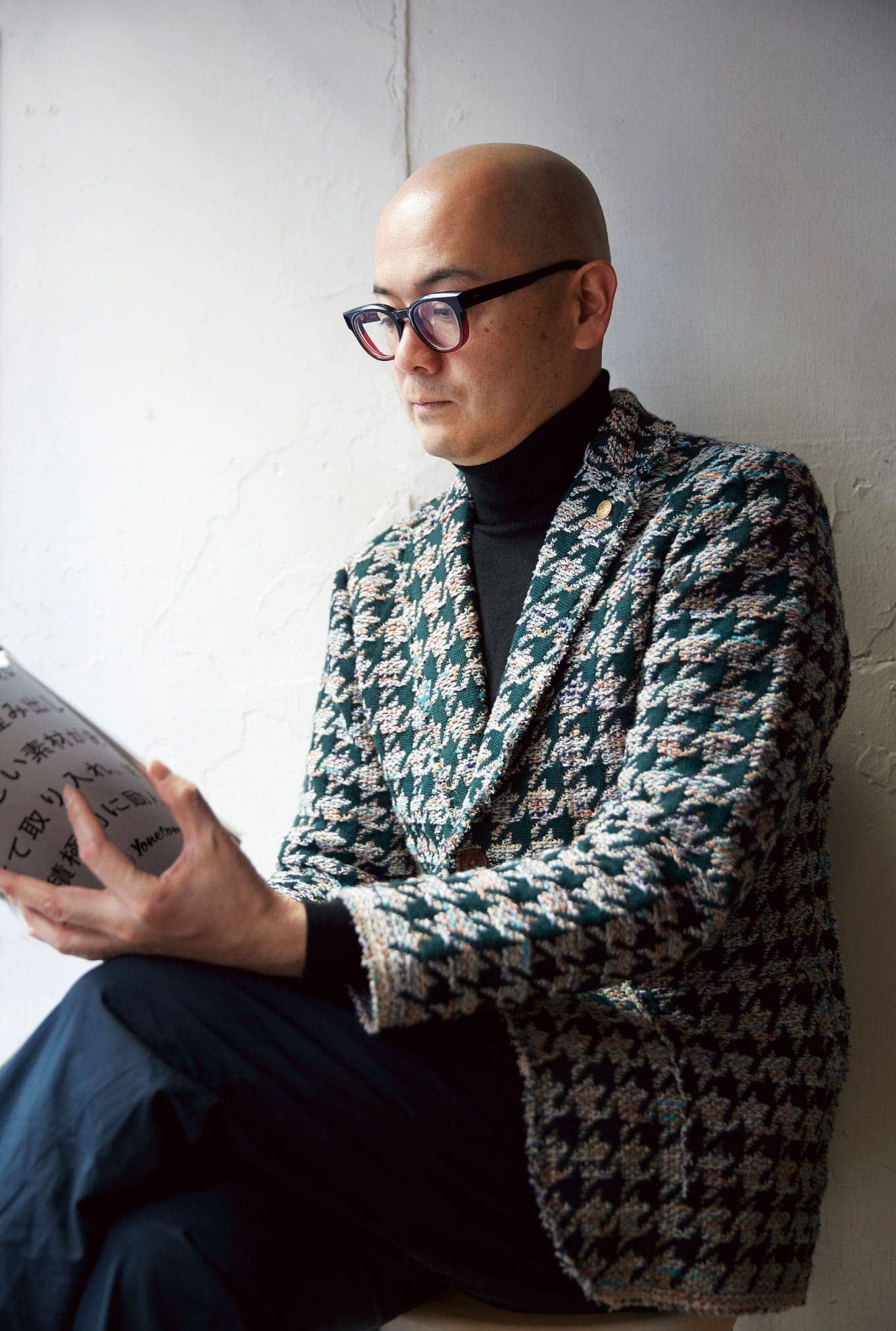 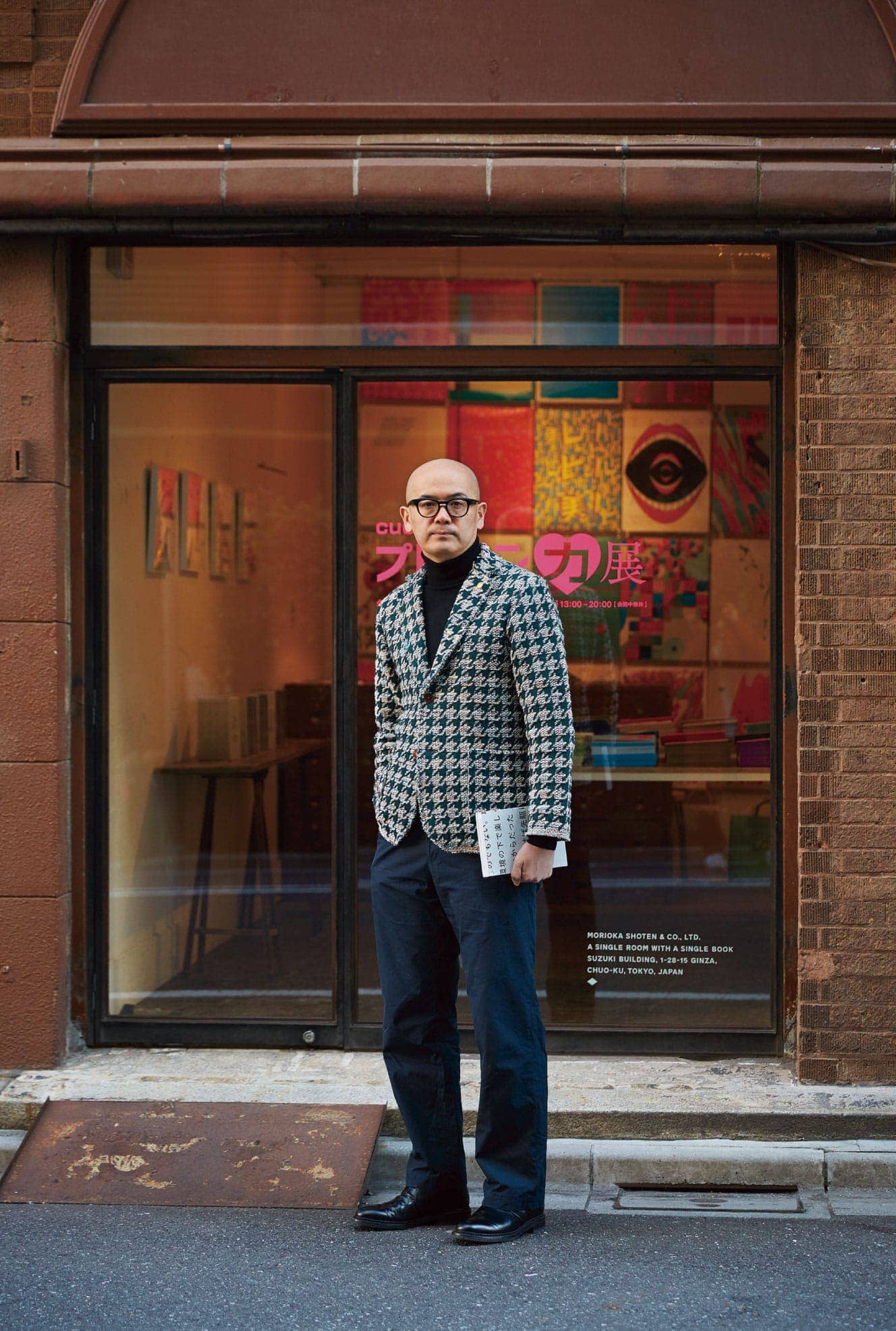 After working in a secondhand bookstore in Tokyo’s “book town” of Jinbocho, Yoshiyuki Morioka opened a bookstore in the Kayabacho area, relocating in May of 2015 to the first floor of a historic building in the Ginza 1-chome district. The Morioka Shoten bookstore is known for its unique practice of stocking multiple copies of only a single title at a time, featuring a different book each week. Morioka Shoten proprietor and book director Yoshiyuki Morioka has long been a fan of COOHEM jackets, and today we speak to him about clothing, roots, craftsmanship, Japan and the world in general.

The attraction of clothing

I guess I’m attracted by a piece of clothing when I can see myself in it, and know when and where I’d wear it. Or when it’s something that I just really want to put on. The first time I saw a piece of COOHEM clothing, I was struck by how interesting its texture and color was, and I had to take it in hand to get a closer look. COOHEM items have a really nice shape, with their streamlined form and stylish curves. I even like the color of the buttons. And when you wear the clothes, they are comfortable to move around in. I usually wear simple, light-colored clothes, but a patterned (COOHEM) jacket with a strong sense of design is perfect for times such as when I’m asked to appear at a talk event.

Growing up with roots grounded in nature

I was born and raised in Sagae, a city which borders Yamanobe town (where Yonetomi Seni is located) to the north and is known for being full of nature. In the summer we’d swim in the rivers and go spearfishing for ayu (sweetfish), which we then grilled and ate, and we’d go hunting for beetles too. With all the hunting and gathering we did, it was almost like we were living in prehistoric Jomon-period Japan!
In our modern society, I find that the place where it is actually most possible to lead a Jomon-period type of lifestyle is Tokyo. There, you go out and find people who interest you, and if you come up with a good plan, you go after the people who can help make it happen. So I’m still hunting and gathering, just like I did when I was a kid. To change the subject a bit, I think that people have a tendency to be overconfident and mistaken in their basic assumption that there is no nature in big cities. Tokyo, if you think about it, was carved from rocks and earth. Our subway system is a subterranean cave. In the Ginza vicinity, you see many construction sites overflowing with gravel, and glass is a natural material that originally comes from rock. There are abandoned lots overgrown with weeds, and many more varieties of insects than I wish there were. In some ways, I think that Tokyo is a truly organic city, and full of nature.

Considering Japan and the world through the lens of craftsmanship

I think we should recognize Japanese craftsmanship and handiwork as a real treasure. In the 150 years since the Meiji Restoration, Japan has kept pace with a huge influx of modernism and foreign culture, and with their natural ingenuity, the Japanese people have not only managed to replicate these new things, but to take their quality to a higher level. In the opposite direction, Japanese elements such as ukiyoe prints have permeated Western culture, becoming a source of influence and inspiration. I have traveled to many parts of the world, but I don’t think there is any nationality that has as much of an aesthetic appreciation for daily life as the Japanese. Inbound tourism to Japan is projected to reach 4 million people in the future, but where will all these tourists go? I think it might be a good idea to open facilities that collect and display all of the traditional craftworks that have been an important part of Japanese daily life. There is a philosopher who said that “understanding is independent of the object.” The world exists because understanding exists, and it follows that the broadening of understanding leads to a broadening of the world. Understanding grows in actual spaces such as cafes and bookstores, and also by learning new things through the people we meet and communicate with, the travels we go on and the books we read. And how much can we free ourselves from time and space? Time, space and the world are all connected.

I think that happiness is found in the cups and dishes we use everyday, the small presents we give each other, the trifling yet dramatic happenings that make up our daily lives. I also think it’s about enjoying our most basic actions. We wear clothes and eat meals everyday, so this is something that we should enjoy. Social networking now makes it easier to get a look into the lives that each of us are living, making it easier to spread happiness, so I like this age that we are living in.